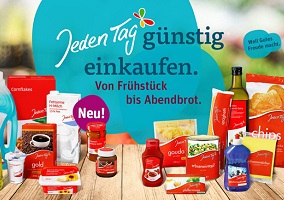 German supermarket chain Tegut, part of the Swiss Migros group, has announced the launch of a new private label brand called Jeden Tag (‘Everyday’) which is positioned as an economy range.

Featuring red-themed packaging, the new brand assortment will comprise a permanent selection of up to 700 items and will offer dairy, confectionery, staple foods, canned foods, frozen foods and household goods, among other products.

The range is said to offer the advantages of low prices, a wide product offering and guaranteed quality, with Tegut saying it worked only with suppliers that had national or international quality certification.

According to ESM, Tegut Jeden Tag will take the place of Tegut’s existing economy brand Kleinster Preis and will be promoted through a variety of on and offline media for a number of weeks, starting in mid-August.