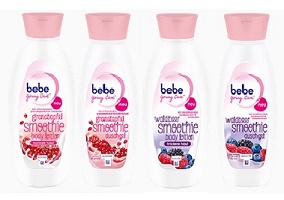 Said to bring a ”Smoothie Feeling” to body care, the line, under the BebeYoung Care brand, comprises shower gel and body lotion in the varieties Pomegranate Smoothie and Forest Fruit Smoothie and is targeted at a teenage audience.

Available from April, the shower gels in the new line are said to feature the freshness of pomegranate blossom extract and raspberry extract respectively. Meanwhile the pomegranate body lotion is described as containing shea butter to care for the skin, while the forest fruit body lotion is said to havebeen specially developed for particularly dry skin.