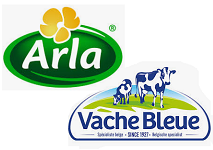 The German division of Danish dairy giant has announced it has sold its plant in Bad Worishofen to the Belgian cheesemaker Vache Bleue.

Arla said it decided to take the step of seeling the plant as production and distribution of the speciality cheeses produced there were no longer in line with the strategic orientation of the stores it supplies in Germany and Europe. The transaction includes the sale of all shares in the French cheese processor Martin Sengele Produits Laitiers, an Arla subsidiary involved in the packaging of speciality cheeses from the Bad Worishofen plant, primarily for the French market.

As part of the deal, Vache Bleue is set to produce cheese products for Arla until further notice, so that Arla can meet its current supply contracts with retail customers.  The handover of the site is due to be complete by the end of Q1 2019.