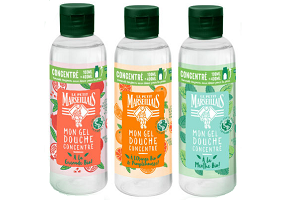 Johnson & Johnson, the leading personal care and pharmaceutical firm, is aiming to boost its environmental credentials with the launch of a concentrated shower gel in France as part of the Le Petit Marseillais range, according to an LSA report.

Described as the first mass-market product of its kind in France, Le Petit Marseillais Concentrated Shower Gel is due for launch in August or September of this year. A 100ml bottle of the product is said to be equivalent to a 400ml bottle of a conventional shower gel.

According to Johnson & Johnson, the new format requires 45% less water in its manufacture, while the smaller bottle uses 60% less plastic than a conventional shower gel.

Free from artificial colours, the product range is described as being made from natural ingredients including lemon, orange blossom, pomegranate, orange, mint and poppy. It will be priced at between €2.99 and €3.30 ($3.36 and $3.71) per bottle.

Johnson & Johnson’s launch follows on from a similar concept introduced by Yves Rocher into the pharmacy channel around two years ago.