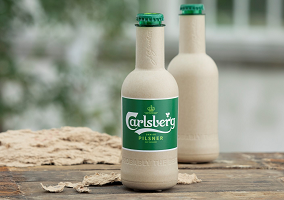 Carlsberg, the Danish beer giant, has unveiled two new research prototypes as part of its Green Fibre Bottle initiative, a project to develop a fully biodegradable wood-fibre drinks bottle which it first announced in 2015.

The beermaker said it would now also be joined in the project by Coca-Cola, Absolut and L’Oreal in a paper bottle “community” launched by Paboco, a joint venture between packaging company BillerudKorsnas and bottle manufacturing specialist Alpla.

Commenting on the latest developments, Myriam Shingleton, vice president group development at Carlsberg, said: “We continue to innovate across all our packaging formats, and we are pleased with the progress we’ve made on the Green Fibre Bottle so far. While we are not completely there yet, the two prototypes are an important step towards realising our ultimate ambition of bringing this breakthrough to market”.