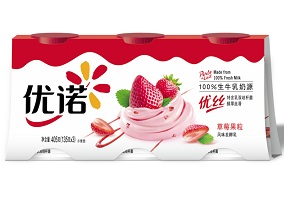 General Mills Inc. has announced that it has released its Yoplait brand of yogurt in China.

The brand is being rolled out through three lines: Perle de Lait, a thick French-style yogurt; Panier de Fruits, a yogurt with a fruit layer on the bottom; and O’Fruit, a yogurt drink with large fruit pieces.

The company said it planned to distribute throughout Shanghai initially and then expand from there with a city-by-city approach. The product launch marked the largest expansion of the Yoplait international brand since General Mills assumed a controlling interest in Yoplait in 2011, the company added.

Gary Chu, president of General Mills Greater China said “With the tremendous economic growth in China, consumers are increasingly demanding better quality and experience of foods”, adding: “our goal from the very beginning was to bring the authentic French taste of Yoplait yogurt to China.”

To get an authentic taste, the new yogurt production facility, in a suburb of Shanghai, reportedly uses the same production processes as in France.

According to General Mills, Yoplait is the strong no. 2 player in the $83 billion global yogurt category, generating $4 billion in retail sales and available in more than 50 markets internationally.