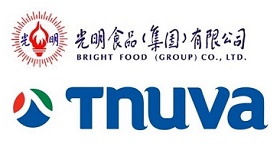 The group, backed by the Shanghai government, has plans to expand overseas and it is said the deal would give Bright Food a broader range of high-quality products to bring into China to tap local demand.

According to company spokesman Pan Jianjun, Bright Food has reached a preliminary agreement with Apax Partners LLP, a private-equity firm that has invested in Tnuva, to acquire 56% of the Israeli company. While Jianjun stated that a final price had yet to be agreed, reports are that the deal would be in the order of $960 million.

Bright Food has stepped up its acquisition of foreign companies in recent times, most notably buying a 60% stake in British cereal manufacturer Weetabix in 2012.