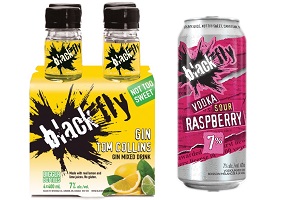 Black Fly, a Canadaian alcoholic drinks firm, has added two more varieties to its product line of “craft-produced” vodka, tequila, rum and whisky mixed drinks, according to a report in Food In Canada.

Gin-mixed “legendary, light and ultra refreshing” Black Fly Gin Tom Collins is said to be “not too sweet” and to be made made with real lemon and lime juice, while vodka-mixed Black Fly Vodka Sour Raspberry is described as “the irresistible taste of fresh juicy raspberries beautifully blended with smooth Canadian vodka”. Both feature 7% abv, are “lightly sweetened with cane sugar” and are claimed to be free from artificial sweeteners and gluten.

Black Fly Gin Tom Collins is offered in a pack of 4 x 400ml “non-breakable, resealable bottles” while Black Fly Vodka Sour Raspberry is sold in a 473ml can.