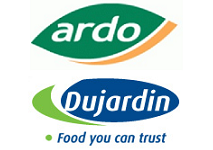 Belgium-based frozen vegetable producers Ardo and Dujardin Foods have announced that the merger agreement between the two companies, signed in March of this year, has been approved by the competition authorities in every market in which the companies are active.

No restrictions or conditions were applied, however the companies said that the merger would not take place until the 31st December 2014 due to a number of legal and financial steps that needed to be completed.

In a statement, the two companies said that their objective was to expand and further strengthen their market-leading position in fresh frozen vegetables & fruit, fresh frozen herbs & ingredients, through a dedicated segment-specific approach for Retail, Foodservice and Industrial customers. In the meantime Ardo said that it would “focus on our strategy, organisation, and an implementation plan that will bring together our potential synergies for maximum benefit”.

As a result of the merger,  the group, which will operate under the Ardo name, will  benefit from 20 production, packing and distribution units in eight European countries with an estimated consolidated turnover of €815 million ($1.05 billion).

Rik Jacob, CEO of Dujardin Foods, commented: “The new Ardo will be an even greater company with a unique European footprint of large scale, specialised plants, sound agricultural expertise, professional management and an entrepreneurial attitude”.