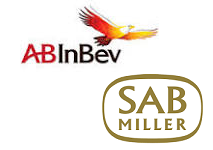 AB InBev has confirmed in a statement that it has approached rival beermaker SABMiller regarding a possible combination of the two companies.

The mooted deal, valued at approximately $250 billion, would bring together a host of globally important brands, such as Stella Artois, Budweiser, Corona (owned by AB InBev) and Grolsch, Peroni and Fosters (owned by SABMiller).

AB InBev is the world’s largest brewery company, and SABMiller the second largest.

In response to AB InBev’s press release, SABMiller released a statement of its own in which it confirmed the approach but said that no firm offer had yet been made. “The Board of SABMiller will review and respond as appropriate to any proposal which might be made. There can be no certainty that an offer will be made or as to the terms on which any offer might be made. In the interim, shareholders are strongly advised to retain their shares and to take no action”, the company said.

According to a report in The Guardian, shares in SABMiller soared by more than 22% following the announcement, while AB InBev rose 11%.