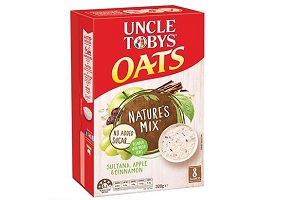 FMCG multinational Nestle has expanded its breakfast range of oat sachets in Australia by launching a range called Nature’s Mix under the Uncle Tobys brand.

The product, said to be launched due to increased demand from consumers for low-sugar products, is  described as a “no added sugar” range that is “naturally sweetened with dried fruit and healthy nuts”.

Designed to “help Australians to lead healthy and active lifestyles”, the new product is marketed as “quick and delicious breakfast option” that can be prepared in 90 seconds.