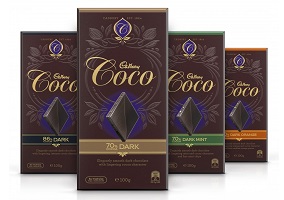 Mondelez International has announced the launch of a new premium chocolate range in Australia under the name Cadbury Coco, according to reports in B&T and Australian Food News.

The new range, which is designed to expand the Cadbury brand into the premium arena, comprises only dark chocolate and will come on the market in plain varieties with 70% and 80% cocoa as well as flavoured versions named Dark Mint and Dark Orange.

Kate Watson, senior brand manager for Cadbury Coco at Mondelez International, said: “Cadbury Coco is a genuinely new offering for the category from Cadbury and we know it will capture the imagination of Australians who enjoy the finer things in life”.