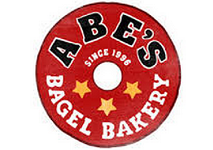 The bagel crisps are said to be free from preservatives and artificial colours, while they are also said to have 50% less fat than standard potato chips.