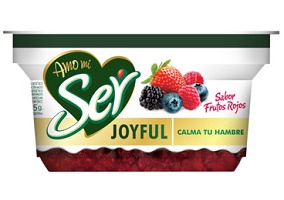 Danone has launched its latest yoghurt product – Ser Joyful – in an attempt to boost growth in the fat-free yoghurt sector in Argentina, according to a report in Adlatina.

The new yoghut is described as featuring fruit pieces and twice as much protein as a regular yoghurt, as well as containing fewer than 99 calories. The launch is hoped to drive 10% medium-term growth for the health-oriented Ser brand, as well as to reinvigorate the fat-free segment which has reportedly been declining in Argentina.

Positioned as a yoghurt that “satisfies hunger”, the product is being promoted as a healthy between-meal snack in response to changing consumer habits. Isaac Diaz Marin, marketing director at Danone Argentina, commented: “We are seeing two parallel trends: eating more between meals, which generally leads to eating more unhealthy food; but also a desire to take of yourself, without compromising on flavour. Ser Joyful is the solution to this”.

Danone Ser Joyful yoghurt is being made avaialble in Peach and Red Fruit varieties.